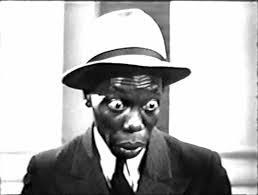 Akpos and Ofego were having dinner when suddenly armed robber broke into their house.  Akpos wanted to run away but he said to himself dat if he run away, he might be killed so he freezed himself & stood like an image. The armed robber ordered for money but they did not have money, so d armed robber looked at d image, then turned to Akpos’ friend Ofego and said:
Armed Robber: Take a look at such a beautiful image you have in ur house, but you don’t have any money. Infact i’m going to destroy dis image.  sets his gun, points at the image(Akpos) and was about to shoot.*
Akpos: (screamed out!) Please dont shoot, I am d image of God.
Armed Robber: So here you are, I have been praying to you to give me job but you don’t want to answer my prayer. Today, since i have d opportunity of seeing you, i will not let u escape. When you get to hell, explain to them why u did not want to give me a job.
*about to shoot*
Akpos: (screamed out again!) Please, please, I am d image of Akpos. I don’t want to die!.

I dey find My wife

10 Romantic Yoruba Words Wey You Use For Your Bae

10 Romantic Yoruba Words Wey You Use For Your Bae